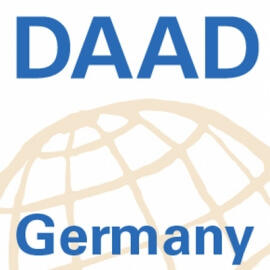 The German Academic Exchange Service or DAAD (German: Deutscher Akademischer Austauschdienst) is the largest German support organisation in the field of international academic co-operation. DAAD is a private, federally funded and state-funded, self-governing national agency of the institutions of higher education in Germany, representing 365 German higher education institutions (100 universities and technical universities, 162 general universities of applied sciences, and 52 colleges of music and art) [2003]. The DAAD itself does not offer programs of study or courses, but awards competitive, merit-based grants for use toward study and/or research in Germany at any of the accredited German institutions of higher education. It also awards grants to German students, doctoral students, and scholars for studies and research abroad. With an annual budget of nearly 400 million Euros and supporting approximately 50,000 grantees annually, approximately 11,000 of which are on long-term scholarships, the DAAD is in fact the largest such academic grant organisation worldwide. The organisation was founded on 1 January 1925 but closed down in 1945, only to be refounded again in 1950.