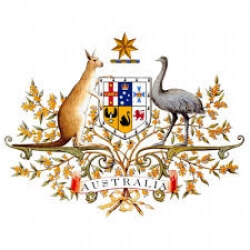 The Government of the Commonwealth of Australia, also referred to as the Australian Government, Commonwealth Government or the Federal Government, is the federal democratic administrative authority of Australia. The Commonwealth of Australia, a federal constitutional monarchy under a parliamentary democracy, was formed in 1901 as a result of an agreement among six self-governing British colonies, which became the six states. The terms of this contract are embodied in the Australian Constitution, which was drawn up at a Constitutional Convention and ratified by the people of the colonies at referendums. The structure of the Australian Government may be examined in light of two distinct concepts, namely federalism and the separation of powers into executive, legislative, and judicial branches of government. Separation of powers is implied from the structure of the Constitution which breaks down the branches of government into separate chapters. The Australian federal system is a unique mixture of the Westminster and U.S. systems of federal representative democracy, with important elements of both present.

Asking For Help About The Universities Fees , Loans ,the General Requirements To Study Chinese Language (master Degree) In Melbourne

hello, i am sandy from egypt this year is the last one at college i will graduate on June 2020 i hav...