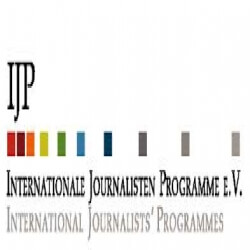 The International Journalists' Programmes (IJP) are a non-profit and economically as well as politically independent organisation for the promotion of young journalists. It was established in 1981. IJP are an association, registered in Germany at the local court in Koenigstein near Frankfurt/Main under reg. no. 8 VR 646. IJP are organised decentrally and have no administration. All programmes are organised by the members and board members of IJP, who themselves work as journalists or for media enterprises. The responsibility for the individual programmes lies by the respective coordinators, who belong to the executive committee of IJP. Board members are appointed on a volonteer basis. The executive board is selected by the meeting of the members (30). The core purpose of IJP's bursaries is the international exchange of media talents and opinion makers. For every German journalist taking part in a programme abroad a foreign colleague will work in a German media organisation. Hereby, delegates gain valuable professional and personal experience and impressions. At the same time, they contribute to an overall better representation of Germany abroad and more differentiated reporting within the German media landscape. IJP bursaries are a valuable additional qualification. It is remarkable how many German foreign correspondents are alumni of IJP. Yearly around 120 journalists from 10 regions of the world are awarded an IJP fellowship.