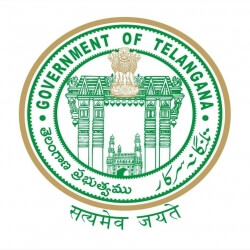 Government of Telangana (Telugu: à°¤à±†à°²à°‚à°—à°¾à°£ à°ªà±à°°à°­à±à°¤à±à°µà°®à±), is a democratically elected body that governs the State of Telangana, India. The state government is headed by the Governor of Telangana as the nominal head of state, with a democratically elected Chief Minister as real head of the executive. The governor who is appointed for five years appoints the chief minister and his council of ministers. Even though the governor remains the ceremonial head of the state, the day-to-day running of the government is taken care of by the chief minister and his council of ministers in whom a great deal of legislative powers is vested. The state government maintains its capital at Hyderabad and is seated at the Government Secretariat or the Sachivalayam. The Government of Telangana was formed on 2 June 2014 after bifurication of Andhra Pradesh as part of Andhra Pradesh Reorganisation Act, 2014.