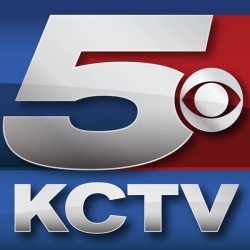 KCTV, virtual channel 5 (UHF digital channel 24), is a CBS-affiliated television station serving Kansas City, Missouri and Kansas City, Kansas, United States. The station is owned by the Meredith Local Media subsidiary of the Meredith Corporation, as part of a duopoly with MyNetworkTV affiliate KSMO-TV (channel 62). The two stations share studio facilities located on Shawnee Mission Parkway (U.S. 56/U.S. 169) in Fairway, Kansas; KCTV maintains transmitter facilities located on East 31st Street in the Union Hill section of Kansas City, Missouri (adjacent to the studios of PBS member station KCPT (channel 19)). On cable, the station is available on Time Warner Cable and SureWest channel 3, and Google Fiber and AT&T U-verse channel 5. KCTV also serves as a default affiliate for Saint Joseph, as that market (located to the immediate north) does not have a CBS affiliate of its own (KQTV (channel 2), which had originally served as that market's CBS affiliate beginning at its sign-on in September 1953, became a full-time ABC affiliate in June 1967); KCTV's transmitter produces a city-grade signal that reaches Saint Joseph proper, and the station is carried on cable and satellite providers in that market.