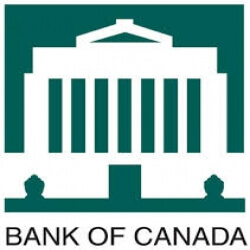 The Bank of Canada, BoC (French: Banque du Canada) is Canada's central bank. The Bank was chartered by and under the Bank of Canada Act on July 3, 1934, as a privately-owned corporation. In 1938, the Bank was legally designated a federal Crown corporation. The Minister of Finance holds the entire share capital issued by the bank. "The capital shall be divided into one hundred thousand shares of the par value of fifty dollars each, which shall be issued to the Minister to be held by the Minister on behalf of Her Majesty in right of Canada." The essential role of the Bank, as Canada's central bank, is to "promote the economic and financial well-being of Canada." More specifically, the responsibilities of the Bank are: the formulation of monetary policy; as the sole issuing authority of Canadian banknotes; the promotion of a safe, sound financial system within Canada; and funds management and central banking services "for the federal government, the Bank and other clients." The Bank of Canada headquarters are located at the Bank of Canada Building, in the nation's capital, Ottawa. The edifice also houses the Currency Museum, which opened in December, 1980.