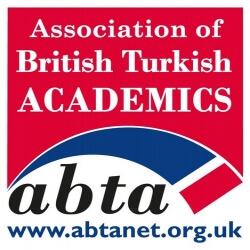 Association of British and Turkish Academics is the leading professional association for scholars in the U.K. and in Turkey dedicated to creating academic partnerships and bridges between two countries. ABTA was established in London in 2010 as a non-profit and a non-political organization and exclusively for scientific, charitable, and educational purposes. Objectives We aim to: A. Increase flows of knowledge and innovation between the U.K. and Turkey B. Promote educational, scientific and technological exchanges and cooperation between two countries C. Promote sustainable academic connections and cooperation projects between Turkey and the U.K. D. Contribute to the development of next generation Turkish and British academics E. Foster high quality connections and bonds of friendship between Turkish and British academics F. Create an environment for dialogue to bridge partnerships and facilitate networking among Turkish and British scholars G. Foster deeper mutual understanding through educational and scientific exchange between Turkey and the U.K. H. Promote peace and cultural understanding through educational and academic exchange I. Strengthen the British-Turkish academic relationships as a vital component of Turkeyâ€™s involvement in the EU J. Promote enduring ties between Britain and Turkey by contributing to a new generation of scholars and academic leaders interested in developing sustainable linkages and partnerships Scope of Activities A. Link British and Turkish universities through exchange programs, academic partnerships, and research collaboration B. Develop bilateral learning and networking programmes (including professional development workshops, academic seminars, workshops, conferences) for academics in the U.K. and in Turkey C. Invite guest speakers and offer luncheons and organize academic and professional gatherings to bring Turkish and British academics together D. Organize campus visits, workshops, fairs, and academic events for universities, academics, and academic leaders to create business partnerships E. Provide assistance to British academics who are interested in conducting research in or about Turkey F. Organize academic trips and travel programs for British academics to visit Turkey G. Support research to stimulate knowledge exchange and flow of information between the U.K. and Turkey H. Enrich the professional development of ABTA members through academic seminars, workshops, conferences, trips, and networking activities I. Initiate and support academic scholarship and fellowship programs that target the best and brightest graduate students, researchers and academics to work in the U.K. or in Turkey