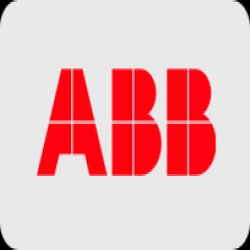 ABB (ASEA Brown Boveri) is a multinational corporation headquartered in Zurich, Switzerland, operating mainly in robotics and the power and automation technology areas. It ranked 158th in the Forbes Ranking (2013). ABB is one of the largest engineering companies as well as one of the largest conglomerates in the world. ABB has operations in around 100 countries, with approximately 150,000 employees in November 2013, and reported global revenue of $40 billion for 2011. ABB is traded on the SIX Swiss Exchange in ZÃ¼rich and the Stockholm Stock Exchange in Sweden since 1999, the New York Stock Exchange in the United States since 2001, September 2005 on London Stock Exchange and in November 2005 on the Frankfurt Stock Exchange. ABB is also traded on the National Stock Exchange of India and on the Bombay Stock Exchange. The Indian subsidiary of ABB has a market capitalization of over $4 billion.