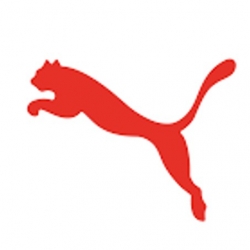 Puma SE, branded as PUMA, is a major German multinational company that produces athletic and casual footwear, as well as sportswear, headquartered in Herzogenaurach, Bavaria, Germany. The company was formed in 1924 as GebrÃ¼der Dassler Schuhfabrik by Adolf and Rudolf Dassler. The relationship between the two brothers deteriorated until the two agreed to split in 1948, forming two separate entities, Adidas and Puma. Both companies are currently based in Herzogenaurach, Germany. Puma makes football boots and has sponsored a number of footballers, including PelÃ©, EusÃ©bio, Johan Cruyff, Diego Maradona, Lothar MatthÃ¤us, Kenny Dalglish, Thierry Henry, Robert PirÃ¨s, Adam Lallana, Radamel Falcao, Sergio AgÃ¼ero, Cesc FÃ bregas, Olivier Giroud, Marco Reus, Marco Verratti, Gianluigi Buffon, Mario Balotelli and Diego GodÃ­n. Puma is the sponsor of the Jamaican track athlete Usain Bolt. The first endorser for Asian Region is Luhan, a Chinese actor and singer. In the United States, the company is known for the suede basketball shoe it introduced in 1968, which eventually bore the name of New York Knicks basketball star Walt "Clyde" Frazier, and for its endorsement partnership with Joe Namath. Following the split from his brother, Rudolf Dassler originally registered the new-established company as Ruda, but later changed the name to Puma. Puma's earliest logo consisted of a square and beast jumping through a D, which was registered, along with the company's name, in 1948. Puma's shoe and clothing designs feature the Puma logo and the distinctive "Formstrip" . The company offers lines of shoes and sports clothing designed by Lamine Kouyate, Amy Garbers, and others. Since 1996 Puma has intensified its activities in the United States. Puma owns 25% of American brand sports clothing maker Logo Athletic, which is licensed by American professional basketball and association football leagues. Since 2007 Puma has been part of French group Kering (formerly known as Pinault-Printemps-Redoute or PPR). Puma also manufactures other products such as clothes and bags. Most of them have a tag that includes a fingertip design and phrases like 'Always be yourself' and 'Wash this when dirty'.