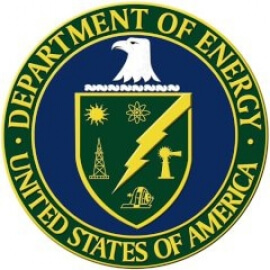 The United States Department of Energy (DOE) is a Cabinet-level department of the United States Government concerned with the United States' policies regarding energy and safety in handling nuclear material. Its responsibilities include the nation's nuclear weapons program, nuclear reactor production for the United States Navy, energy conservation, energy-related research, radioactive waste disposal, and domestic energy production. It also directs research in genomics; the Human Genome Project originated in a DOE initiative. DOE sponsors more research in the physical sciences than any other U. S. federal agency, the majority of which is conducted through its system of National Laboratories. The agency is administered by the United States Secretary of Energy, and its headquarters are located in Southwest Washington, D.C., on Independence Avenue in the James V. Forrestal Building, named for James Forrestal, as well as in Germantown, Maryland.