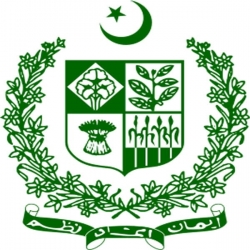 The Government of Pakistan (Urdu: Ø­Ú©ÙˆÙ…ØªÙ Ù¾Ø§Ú©Ø³ØªØ§Ù†â€Ž) is a federal government established by the Constitution of Pakistan as a constituted governing authority of the four provinces of a proclaimed and established parliamentary democratic republic, constitutionally called the Islamic Republic of Pakistan. Effecting the Westminster system for governing the state, the government is mainly composed of the executive, legislative, and judicial branches, in which all powers are vested by the Constitution in the Parliament, the Prime Minister and the Supreme Court. The powers and duties of these branches are further defined by acts and amendments of the Parliament, including the creation of executive institutions, departments and courts inferior to the Supreme Court. By constitutional powers, the President promulgates ordinances and passes bills. The President acts as the ceremonial figurehead while the people-elected Prime Minister acts as the chief executive (of the executive branch) and is responsible for running the federal government. There is a bicameral Parliament with the National Assembly as a lower house and the Senate as an upper house. The judicial branch systematically contains an apex Supreme Court, high courts of four provinces, district, anti-terrorism, Sharia, and the green courts; all inferior to the Supreme Court. The full name of the country is the Islamic Republic of Pakistan. No other name appears in the Constitution, and this is the name that appears on money, in treaties, and in legal cases. The "Pakistan Government" or "Government of Pakistan" are often used in official documents representing the federal government collectively. Also, the terms "Federal" and "National" in government institutions or program names generally indicate affiliation with the federal government. Because the seat of government is in Islamabad, "Islamabad" is commonly used as a metonym for the federal government.