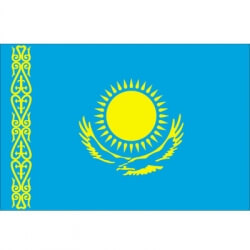 The Government of the Republic of Kazakhstan (Kazakh: ÒšÐ°Ð·Ð°Ò›ÑÑ‚Ð°Ð½ Ð ÐµÑÐ¿ÑƒÐ±Ð»Ð¸ÐºÐ°ÑÑ‹Ð½Ñ‹Ò£ Ò®ÐºÑ–Ð¼ÐµÑ‚Ñ–) oversees a presidential republic. The President of Kazakhstan, currently Nursultan Nazarbayev, is head of state and nominates the head of government. Executive power is exercised by the government. Legislative power is vested in both the government and the two chambers of parliament. In July 2015 Kazakhstan was ranked 50th in the Government Efficiency Index compiled by World Economic Forum. The efficiency index considers expenditures, workload regulations and political transparency. Kazakhstan beats of a number of European countries in government efficiency, according to the list. In particular, Kazakhstan is ahead of Belgium and France.