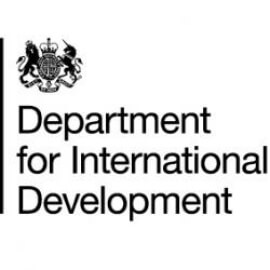 The Department for International Development (DFID) is a United Kingdom government department responsible for administering overseas aid. The goal of the department is "to promote sustainable development and eliminate world poverty". The Secretary of State for International Development is Justine Greening. In a 2010 report by the Development Assistance Committee (DAC), DFID was described as "an international development leader in times of global crisis". The UK aid logo is often used to publicly acknowledge DFID's development programmes are funded by UK taxpayers. DFID's main programme areas of work are Education, Health, Social Services, Water Supply and Sanitation, Government and Civil Society, Economic Sector (including Infrastructure, Production Sectors and Developing Planning), Environment Protection, Research, and Humanitarian Assistance. In 2009/10 DFIDâ€™s Gross Public Expenditure on Development was Â£6.65bn. Of this Â£3.96bn was spent on Bilateral Aid (including debt relief, humanitarian assistance and project funding) and Â£2.46bn was spent on Multilateral Aid (including support to the EU, World Bank, UN and other related agencies). Although the Department for International Developmentâ€™s foreign aid budget was not affected by the cuts outlined by the Chancellor of the Exchequerâ€™s 2010 spending review, DFID will see their administration budgets slashed by approximately 19 percent over the next four years. This would mean a reduction in back-office costs to account for only 2 percent of their total spend by 2015. In June 2013 as part of the 2013 Spending Round outcomes it was announced that DFID's total programme budget would increase to Â£10.3bn in 2014/15 and Â£11.1bn in 2015/16 to help meet the UK government's commitment to spend 0.7% of GNI (Gross National Income) on ODA (Official Development Assistance). DFID is responsible for the majority of UK ODA; projected to total Â£11.7bn in 2014/15 and Â£12.2bn in 2015/16. The National Audit Office (NAO) 2009 Performance Management review looks at how DFID has restructured its performance management arrangements over the last 6 years. The report responded to a request from DFIDâ€™s Accounting Officer to re-visit the topic periodically, which the Comptroller and Auditor General agreed would be valuable. The study found that DFID had improved in its general scrutiny of progress in reducing poverty and of progress towards divisional goals, however noted that there was still clear scope for further improvement. ^ Budget 2011 (PDF). London: HM Treasury. 2011. p. 48. Retrieved 30 December 2011. ^ http://www.dfid.gov.uk/Documents/publications1/OECD-DAC-UK-Peer-Review-Report-July2010.pdf ^ http://www.dfid.gov.uk/Documents/publications1/departmental-report/2010/dfid-in-2009-10-revised-6-sept-2010.pdf ^ http://www.devex.com/en/articles/70405?source=EM+DefaultHomepage_Center_3 ^ 2013 Spending Round Outcomes: https://www.gov.uk/government/uploads/system/uploads/attachment_data/file/209036/spending-round-2013-complete.pdf ^ http://www.nao.org.uk/publications/0809/dfid_progress_in_improving_pe.aspx