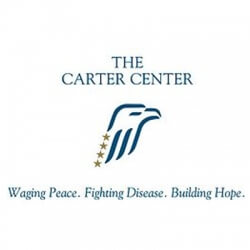 You may also be looking for the Jimmy Carter Library and Museum. The Carter Center is a nongovernmental, not-for-profit organization founded in 1982 by former U.S. President Jimmy Carter and his wife Rosalynn Carter. In partnership with Emory University, The Carter Center works to advance human rights and alleviate human suffering. The Center is governed by a Board of Trustees, consisting of many prominent business persons, educators, former government officials, and eminent philanthropists. The Atlanta-based center has helped to improve the quality of life for people in more than 80 countries. In 2002, President Carter received the Nobel Peace Prize for his work â€œto find peaceful solutions to international conflicts, to advance democracy and human rights, and to promote economic and social developmentâ€ through The Carter Center. Beyond the White House: Waging Peace, Fighting Disease, Building Hope chronicles the first 25 years of The Carter Center. It was written by President Carter and published in 2007 by Simon & Schuster.