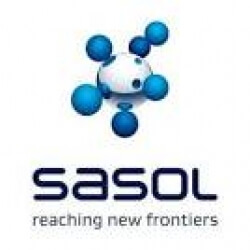 Sasol Limited is an integrated energy and chemical company based in Johannesburg, South Africa. The company was formed in 1950 in Sasolburg, South Africa. It develops and commercialises technologies, including synthetic fuels technologies, and produces different liquid fuels, chemicals and electricity. Sasol is listed on the Johannesburg Stock Exchange (JSE: SOL) and the New York Stock Exchange (NYSE: SSL). Major shareholders include the South African Government Employees Pension Fund, Industrial Development Corporation of South Africa Limited (IDC), Allan Gray Investment Counsel, Coronation Fund Managers, Investec Asset Management, and others. Sasol employs 32,400 people worldwide and has operations in 37 countries. It is the largest corporate taxpayer in South Africa. On March 9, 2015 Sasol announced it will cut 1,500 jobs in response to low oil prices. On June 8, 2015 the President and Chief Operating Officer, David Constable announced he would not be renewing his contract when it expires on June 30, 2016. He will transition into an advisory role from July 2016.