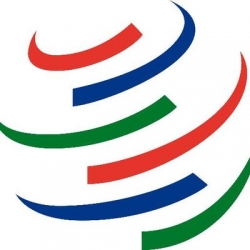 The World Trade Organization (WTO) is an intergovernmental organization which regulates international trade. The WTO officially commenced on 1 January 1995 under the Marrakesh Agreement, signed by 123 nations on 15 April 1994, replacing the General Agreement on Tariffs and Trade (GATT), which commenced in 1948. The WTO deals with regulation of trade between participating countries by providing a framework for negotiating trade agreements and a dispute resolution process aimed at enforcing participants' adherence to WTO agreements, which are signed by representatives of member governments and ratified by their parliaments. Most of the issues that the WTO focuses on derive from previous trade negotiations, especially from the Uruguay Round (1986â€“1994). The WTO is attempting to complete negotiations on the Doha Development Round, which was launched in 2001 with an explicit focus on developing countries. As of June 2012, the future of the Doha Round remained uncertain: the work programme lists 21 subjects in which the original deadline of 1 January 2005 was missed, and the round is still incomplete. The conflict between free trade on industrial goods and services but retention of protectionism on farm subsidies to domestic agricultural sector (requested by developed countries) and the substantiation of fair trade on agricultural products (requested by developing countries) remain the major obstacles. This impasse has made it impossible to launch new WTO negotiations beyond the Doha Development Round. As a result, there have been an increasing number of bilateral free trade agreements between governments. As of July 2012, there were various negotiation groups in the WTO system for the current agricultural trade negotiation which is in the condition of stalemate. The WTO's current Director-General is Roberto AzevÃªdo, who leads a staff of over 600 people in Geneva, Switzerland. A trade facilitation agreement known as the Bali Package was reached by all members on 7 December 2013, the first comprehensive agreement in the organization's history.