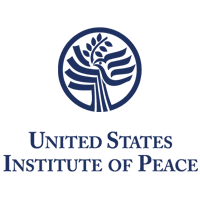 The United States Institute of Peace (USIP) is an American non-partisan, independent, federal institution that provides analysis of and is involved in conflicts around the world. The Institute was established by an act of U.S. Congress that was signed into law by President Ronald Reagan in 1984. The board is appointed by the President and confirmed by the Senate. Its headquarters, in the Foggy Bottom neighborhood of Washington, D.C., sits at the northwest corner of the National Mall near the Lincoln Memorial and Vietnam Veterans Memorial.