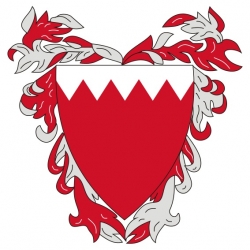 The Cabinet of Bahrain is the chief executive body of the Kingdom of Bahrain. According to Article 32 (b) of the 2002 Constitution, "executive authority is vested in the King together with the Council of Ministers and Ministers". The Council of Ministers (Cabinet) is appointed directly by the King (Article 33d). Bahrain has had only one Prime Minister since the country's independence in 1971, Khalifah ibn Sulman al-Khalifah, the uncle of the reigning King Hamad ibn Isa al-Khalifah. As of 2010, roughly half of the cabinet ministers have been selected from the Al Khalifa family, including the Minister of Defence, Minister of Interior, Minister of Foreign Affairs, Minister of Finance, and Minister of Justice and Islamic Affairs. In February 2011, four ministers were dropped, two added and some portfolios shifted: The ministers dropped in the cabinet reshuffle included Minister of Health Dr Faisal Al Hamar, Minister of Housing Shaikh Ibrahim bin Khalifa Al Khalifa, Minister of Electricity and Water Fahmi Al Jowder and Minister of State for Cabinet Affairs Shaikh Ahmed bin Attiyatallah Al Khalifa. The Ministry of Housing was given to current Labour Minister Dr Majeed Al Alwai, while the Ministry of Labour was given to Undersecretary of Labour Dr Jameel Humadan. The Ministry of Health was given to current Minister of State for Foreign Affairs Dr Nazar Al Baharna. Executive Chairman of Operation at the Bahrain Development Board Kamal Ahmed was given the post of Minister of State for Cabinet Affairs. The Ministry of Oil and Gas joined the Electricity and Water Authority and was named the Ministry of Energy under Minister of Oil and Gas Dr Abdulhussain bin Ali Mirza. In March 2013, Crown Prince Salman was appointed first deputy prime minister. In December 2014, a cabinet reshuffle was made for the fourth legislative term. This reshuffle saw the removal of Ministers of State, the removal of the Ministry of Culture, also 11 previous ministers were removed from their posts and 4 new ministers were added. Some portfolio changes were made as well.

Share about Office of the First Deputy Prime Minister (OFDPM)