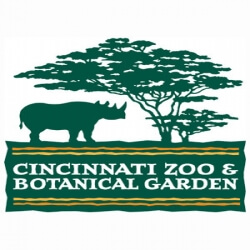 The Cincinnati Zoo and Botanical Garden is the second oldest zoo in the United States and is located in Cincinnati, Ohio. It opened in 1875, just 14 months after the Philadelphia Zoo on July 1, 1874. The Reptile House is the oldest zoo building in the United States, dating from 1875. The Cincinnati Zoo is located in the Avondale neighborhood of Cincinnati . It was founded on 65.4 acres (26.5 ha) in the middle of the city, and since then it has acquired some of the surrounding blocks and several reserves in Cincinnati's outer suburbs. The zoo conducts breeding programs, and was the first to successfully breed California sea lions. The zoo also has other breeding programs including South African cheetahs, Sumatran rhinoceros, Indochinese tigers, Malayan tigers, western lowland gorillas, pottos, and Masai giraffes. The Cincinnati Zoo was the home of Martha, the last living passenger pigeon, which died there in 1914. It was also home to the last living Carolina parakeet in 1918. The zoo is an accredited member of the Association of Zoos and Aquariums (AZA), and a member of the World Association of Zoos and Aquariums (WAZA).